By MICHAEL FINNEGAN (via LA Times) 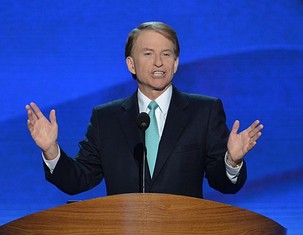 Former state Controller Steve Westly, a wealthy Silicon Valley businessman, is laying ground for a potential run for governor in 2018.

Westly, who now runs a venture capital firm in Menlo Park, has been itching to return to public office since he lost the 2006 Democratic primary for governor. He has been talking privately about the governor’s race with potential supporters.

San Jose Inside, a politics blog, reported Wednesday that Westly told a few dozen technology executives and others at a private gathering in Atherton on Saturday that he’d made up his mind to run.

“Mr. Westly invited close friends and advisors to his home over the weekend to discuss potentially running for office in 2018,” Berman said in an email. “He will make a decision later this year.”

Westly, 58, is a longtime Democratic Party activist who made a fortune as an early executive at Ebay Inc. He was elected state controller in 2002.

In his 2006 campaign for governor, Westly spent $46 million, including $35 million of his own money. His relatively low profile since then all but guarantees that he would need to rely again on his own fortune in 2018.

Katie Merrill, a party strategist who worked for Westly rival Phil Angelides in the 2006 primary, said Westly would face “a very uphill battle.”

“In California politics, voters — particularly in a Democratic primary — are not fond of self-funded candidates,” she said.

Lt. Gov. Gavin Newsom, a former San Francisco mayor, has announced that he plans to run in the June 2018 primary for governor. He started raising money earlier this year. Former Los Angeles Mayor Antonio Villaraigosa has also expressed interest in the race. Both are Democrats.